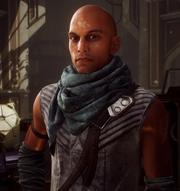 Matthias is a human NPC and Arcanist. He exists only for the sole purpose of allowing you to continue with the Arcanist story line, and is a bald, fair skinned human. You find and save him during the first few missions of your time as a freelancer, and he serves as one of the main characters in the story. He shows many signs of being an eccentric human and is wildly shown as a man who will go to crazy stakes for his survival, stating "once I hid from the dominion patrol in a dung pile. Stank for weeks" showing that he will stop at nothing to find an artifact he desires